A Dark Chapter in Vegas Diaries

Bearing testament to the perils of global terrorism, the mass shooting incident at Las Vegas that claimed 58 innocent lives, once again accentuated th 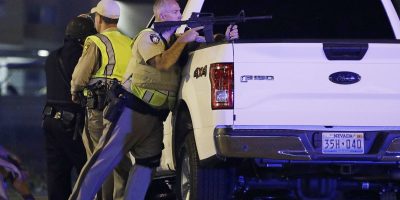 Bearing testament to the perils of global terrorism, the mass shooting incident at Las Vegas that claimed 58 innocent lives, once again accentuated the eclipse of the threat under which our generation is thriving.

On 1st October, 2017, 64 year old Stephen Paddock, of Mesquite, Nevada opened fire at the Route 91 Harvest Country music festival on the Las Vegas from the 32nd floor of a hotel was a horrific act. The massacre claimed the lives of 58 people and injured 530 more, surpassing the Orlando shooting as the deadliest mass shooting by a lone gunman in the history of the U.S.A. Stephen Paddock shot himself after firing hundreds of rounds on the audience. Although the Islamic State has claimed him to be a jihadi who swore allegiance to their cause, the police have found no evidence linking him to the dreaded terrorist organization and the motive of the assailant remains unknown.

This dreadful incident has occurred barely within a span of one year since the Orlando shooting-another lone wolf attack which had claimed 49 lives in a nightclub in Orlando. Although the Orlando shooting was an attack organized by the Islamic State, and Vegas assailant had no affiliation with any known terrorist organization, both the attacks have many similarities and have rekindled the age old Gun Control debate in the USA again. President Trump, a staunch opponent of the Gun Control, avoided addressing the issue in his condolence speech.

Gun Control alone won’t cease the attacks, however, lack of free access to guns to potential criminals will certainly ensure reduction in the number of such incidents. These mass shooting incidents often draw attention to the mental health of the shooter. There is a greater need for more investment in mental health support networks or improved state laws and procedures.

With such instances of mass shooting and terrorist acts on the rise, any hope of continued, permanent peace seems like a glint of dwindling ray of the setting sun, diminishing on the horizon.

SIIB: Where Learning goes Beyond the Classroom 0