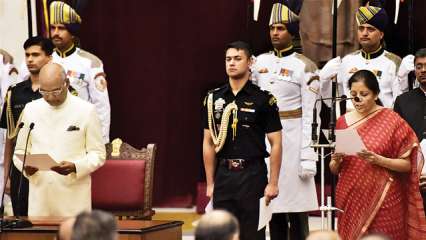 Accentuating the hallmark of being a performance rewarding administration, the Modi Government on Monday shuffled key cabinet portfolios, sending the

Accentuating the hallmark of being a performance rewarding administration, the Modi Government on Monday shuffled key cabinet portfolios, sending the message loud and clear to his ministers: Perform or Perish.

For a change, this reshuffle was a move away from appeasement politics and was instead performance based. A welcome change indeed! Few of the poor performers like; Ministers of State Bandaru Dattatreya and Rajiv Pratap Rudy, were shown the door while Kalraj Mishra was discharged of his duties due to old age. The highlight of the new appointments was the elevation of Nirmala Sitharaman to the key post of the Union Defence Minister known for her integrity and spotless record, making her the first full-time woman Defence Minister of the country.This move has also lead to an important development of having 2 lady Ministers as a part of 5-member Cabinet Committee on Security (CCS).

With women ministers at the helm of key portfolios, prowling the haloed corridors of power of the world’s largest democracy, the idea of women empowerment isn’t merely limited to empty words and unfulfilled promises anymore. While the USA failed to elect its first woman president yet again last year, India has set an example for many countries to follow.

Other important appointments included Piyush Goyal, Dharmendra Pradhan, Hardeep Singh Puri and Alphons Kannanthanam. Veteran BJP leader Uma Bharti was divested of her pet portfolio of River Development and Ganga rejuvenation and instead was given Drinking water and Sanitation. Mr. Suresh Prabhu took over the charge as the Minister of Commerce and Industry.

The Art of the Act of Convincing 0