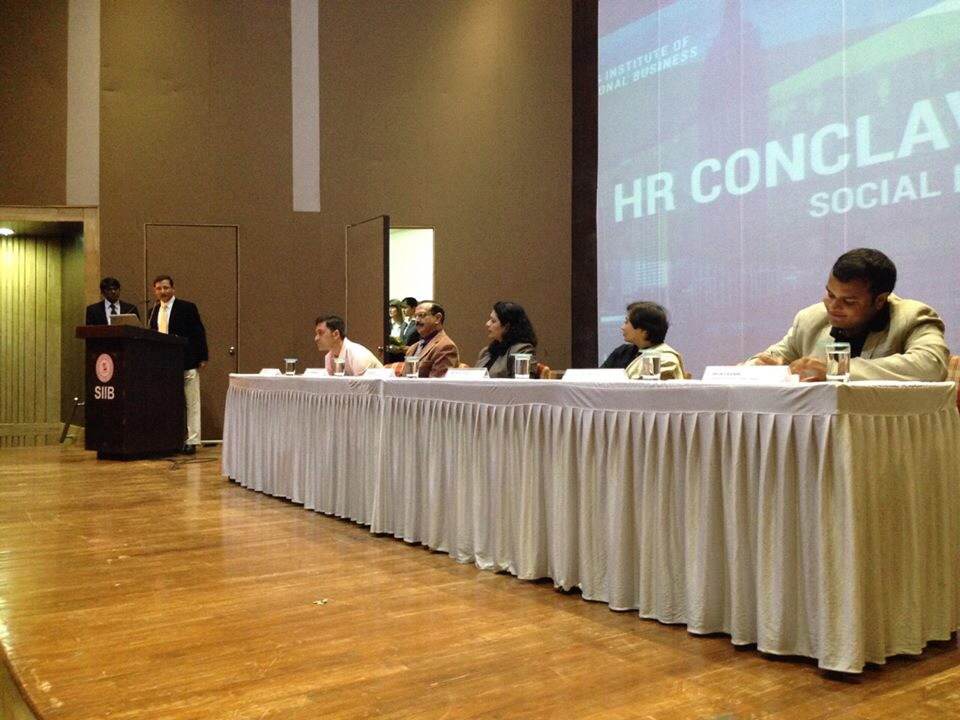 The Post The First HR Conclave was held on 25th July 2015 on the topic ‘Social Media in HR.’ Industry stalwarts had been called to be part of the eve 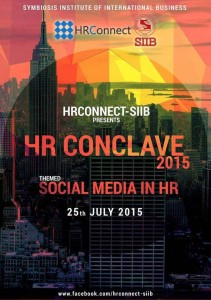 The First HR Conclave was held on 25th July 2015 on the topic ‘Social Media in HR.’ Industry stalwarts had been called to be part of the event. The speakers included Pranali Save (Director, HR at Tieto Software Technologies) who delivered the keynote address, Sahil Tewari (Recruitment Manager at Amazon India), Vishal Thakur (AVP-HR at Tata Capital), Arun S Kaimal (HR Manager at Danaher, Mumbai) and Col. Sunil Brijkrishan (Consultant on Soft Skills and Behavioural Skills).

The event began with lighting of the lamp and felicitation of the guests. After this, the keynote address was delivered by Ms. Save. She shared her insights on Social Media in HR. She spoke about the ‘Conversation Prism’ – a concept that was introduced in 2008 by Brian Solis. She then explained how Social Media is being harnessed today for Employee Engagement, Crowd Sourcing and Employer Branding. She also spoke about the challenges presented by Social Media in the modern workplace and how a robust social media policy is required to combat these. She ended by saying that it was important for organizations to partner with social media.

After the key note speech, a small address was given by Col. Sunil Brijkrishan, who kept the audience in thralls by his witty remarks. He explained the need to be people-centric and warned the students of the perils of social media as well.

A Panel Discussion was held after this with panelists Sahil Tewari, Vishal Thakur and Arun S Kaimal and was moderated by Col. Brijkrishan. The discussion began with an analysis of the limitations & challenges of using Social Media in HR. The panelists agreed that it was impossible to stop employees from accessing personal social media accounts completely, at the workplace. They then discussed about the problem of inaccurate information being furnished on platforms like LinkedIn and the solutions to this problem.

Mr. Kaimal then showed a small presentation on how Social Media has become a force to reckon with in the geo-political arena, the corporate world & the entertainment industry. He made a very valid observation that ‘charm shall win the eye, but merit will win the heart.’ The panellists then spoke about innovative strategies that they had followed by harnessing the power of social media. In one case, it had led to reduction in recruitment costs by 14%. Afterwards, the discussion went on to a deliberation over how HR should react if a candidate wasn’t on social media platforms. The consensus here was that this candidate would be difficult to find since recruitment was becoming increasingly dependent on social media, but there wouldn’t be any bias against them as such.

After this, the floor was opened to the audience for questions. They responded enthusiastically and asked the panelists about a variety of things like how social media impacts efficiency of employees in an organization, how can HR managers verify false information being put up on social media platforms, the ethical of looking at someone’s social media profile before recruiting and so on.

At the conclusion of this invigorating event, the Geo-Political Club ‘Axis Tilt’ was launched by members of batch 2015-17. They introduced the Club and spoke about the discussion forum that was live on LinkedIn, hosting the first discussion on ‘The Geo-Politics & Economics of the Iran Nuclear Deal.’ This Club, which aims to increase awareness and initiate discussions on the world scenario is an important addition to the SIIB family.