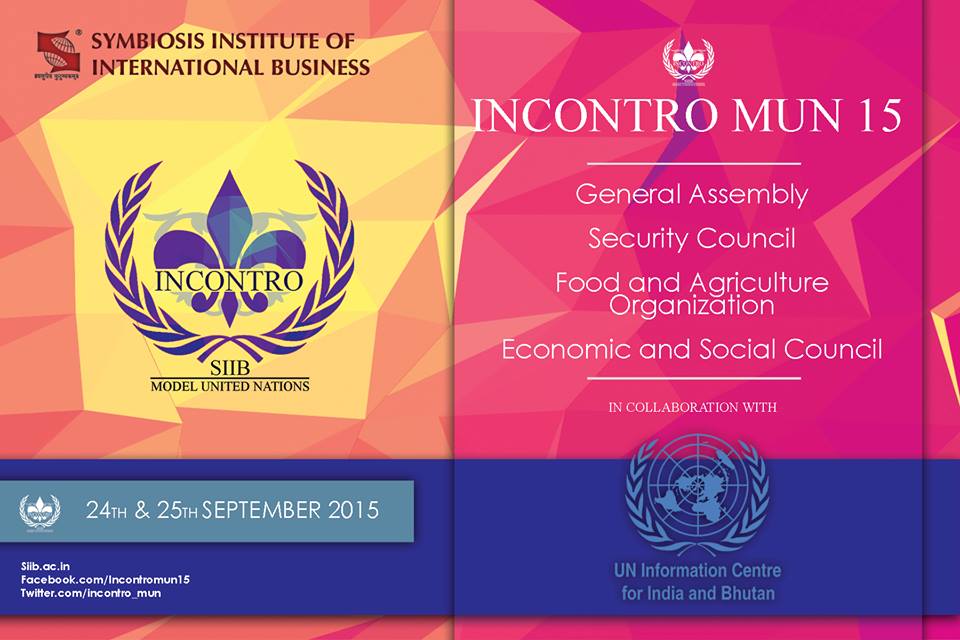 SIIB has a legacy of several MUNs in the past, this year the MUN found a new beginning this year with the creation of brand – ‘Incontro MUN 2015’ and an association with UN Information Center of India and Bhutan (New Delhi). Dr. Asmita Chitnis, the director of SIIB, during her inaugural speech encouraged the participants to emphasize on the United Nations’ Sustainable Development Goals (SDGs) in their discussions and with the leaders of the world convened right now at New York for Sustainable Development Summit (September 25-27, 2015) to adopt the SDGs, it becomes all the more important.

The Incontro MUN 2015 provided the platform for students to explore and experience the phenomenon of United Nations’ councils of General Assembly, Security Council, FAO and ECOSOC. The two days of the event witnessed earnest discussion by the delegates of different nations of the world on the set agendas for the councils for a possible passing of resolution and culminating to a successful MUN.

The Executive Board of each council were quite challenged in finding the king to crown “Best Delegate”. Each council found its winner in the following delegates: Delegate of Germany of General Assembly – Mr. Aman Verma from Symbiosis Institute of International Business, Delegate of Russia of FAO – Ms. Nishitaa Kaushik from Symbiosis Law School (SLS), Delegate of Angola of Security Council – Mr. Deep Bhattacharya from SLS and Delegate of Germany – Ms. Aanchal Bumb from SLS. The Delegate of Nigeria Mr. Rithvik Mathur of SLS from Security Council won the overall Best Delegate beating the delegates of other three councils, which were part of Incontro MUN 2015.

Why should you choose an MBA in Energy and Environment 1