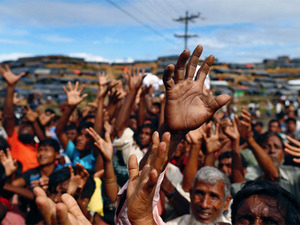 Striking a delicate balance between the moral dilemma of opening up its borders to refugees on humanitarian grounds and compromising the territorial security of the nation, India has decided to deport over 40,000 Rohingya Muslim refugees. The 36th session of United Nations Human Rights Council began with words of criticism for this very policy of India. “I deplore current measures in India to deport Rohingyas at a time of such violence against them in their country”, castigated UNHRC chief Zeid Ra’ad Al Hussein and accused India of ‘lacking basic human compassion’. India deemed the observations of UNHRC as a ‘tendentious judgement’ and responded by saying that the United Nations was turning a blind eye on the true freedoms and rights that the citizens of the largest democracy on earth enjoyed, wherein people from diverse cultural and religious backgrounds live in harmony, celebrating the spirit of secularism in its true essence.

Rohingyas are a minority in Myanmar’s Rakhine region, where an intense military crackdown—likened to ‘ethnic cleansing’ by the United Nations has driven hundreds of thousands of Rohingyas to seek asylum in the neighbouring countries such as India and Bangladesh over the past decade.Of the total 40,000 Rohingyas in India, 14,000 are registered with United Nations High Commissioner for Refugees, and the rest are staying illegally in the country. While the crisis shows no sign of abating, the issue has left Myanmar’s neighbours in a soup, with Bangladesh bearing the brunt of the crisis. Bangladesh is making no bones about wanting India’s intervention to resolve the issue. Back home, with a litigation pending in the Supreme Court challenging the deportation of the Rohingya refugees, the opposition is batting for their asylum and is urging the government to rethink its policy. However, in a country with such high population and scarcity of resources, accommodating refugees in large numbers comes at the cost of well-being of its citizens.

Key to resolving the crisis for once and for all lies in peaceful resolution of civil disputes in Myanmar itself. As a superpower in the subcontinent, India must pressurize the Government of Myanmar to cease its military action against its own citizens and deal with the delicate issue with the sensitivity it deserves.

A peek into supply chain through digitalization !! 0