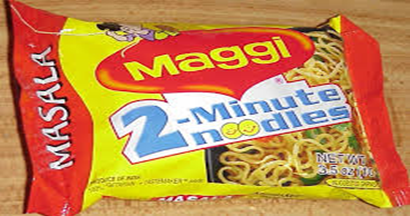 The noodle in a soup !

Maggi !! Though it never really got prepared in 2 minutes, Maggi will always be called the ‘2 minute noodle’. The heartthrob of billions of Indians Though it never really got prepared in 2 minutes, Maggi will always be called the ‘2 minute noodle’. The heartthrob of billions of Indians, Maggi has no less than the status of a Popular Bollywood Star in India. It is said that when Indian moms got too lazy to cook, the Superstar Maggi would come to the rescue of those moms and feed their kids. Maggi being the favorite pastime snack of Indians for almost 25 years now has recently lost its entire luster and was thrown out of the market as some outlier.

So what exactly happened to the lip-smacking snack that ruled India? Where did Nestle, the parent company that made Maggi, go wrong? The main reason was the exceptionally high level of Lead in the raw noodle and the higher than permitted level of MSG in the taste-maker (the powdered spices that gave Maggi its peculiar taste and its variants). Mono-sodium Glutamate (MSG) is the salt of Glutamic acid which, according to the United States Food and Drug Administration (USFDA) is harmless to human body in small quantities, though large quantities have been reported to cause headaches in adults. Lead is itself a poisonous element and even a slight exposure of lead may cause poisoning and death. So the news of Maggi containing these substances have immediately brought down the sale of Maggi and have forced Nestle to recall all the packets of Maggi from the market. The snack, knowing the preparation of which would facilitate people to decorate their Bio data and CVs with hobby as “cooking” had a market share of over 1000 crores. So what brought to the fore the high level of these restricted substances in Maggi? The answer is Mr. V. K. Pandey. An officer in the Food Safety and Drug Administration (FSDA), Pandey led the team who collected the samples of the 2-minute noodle and found out the high levels of the toxic substances. Maggi being a market leader in the Indian noodles category had to bear a loss of around 320 crores with an additional 20 crores given to Ambuja Cements just to burn the recalled Maggi packets! The snack, which had imminent Bollywood celebrities such as Amitabh Bachchan, Priety Zinta and Madhuri Dixit Nene associated with it, had its image completely tarnished. Angered Indian public have even gone so far as to register cases against these actors.

The competitors – Top Ramen, Yippee and Wai Wai have not seen any instant surge in their sales as expected. The Indian junta, though believing a lot on Jugaad has been skeptical even on the consumption of other noodle brands. India is driven by the feel and if the feel is not right, even the void created by India’s dearest noodle can be left vacant. Can there be lead and MSG in the competitor noodles’ too? That’s something only time (read tests) will tell. A multi-billion dollar food industry coming down like a pack of cards, is it the end of Maggi? Do we say Meri Maggi is gone forever? Well, not exactly. Though the Indian government has banned the sale of Maggi in India, there is still no restriction on the exports of Maggi to the Asian and the European countries. There might be some grey days in Maggi’s timeline but surely it’s not the end. Maggi is showing some signs of recovery and there have been reports of the relaunch of Maggi. Even though it’s going to be hard for Nestle to bounce back in its previous position they may do it by some innovative marketing strategies.

They may come up extensive testing across batches and prove that it does not contain excess lead. May be rake in some socially inclined celebrity such as Amir Khan to do a commercial with an apology to gain the lost trust back or showing some processes in the manufacturing of Maggi where some stringent quality checks and norms are followed. Also they may consider changing the packaging of the noodle or changing the name of our beloved Maggi altogether. Whatever the strategy it would be too early to write off Maggi because Meri Maggi always clenches hunger no matter what!

The unconventional guide to cultural solutions 0