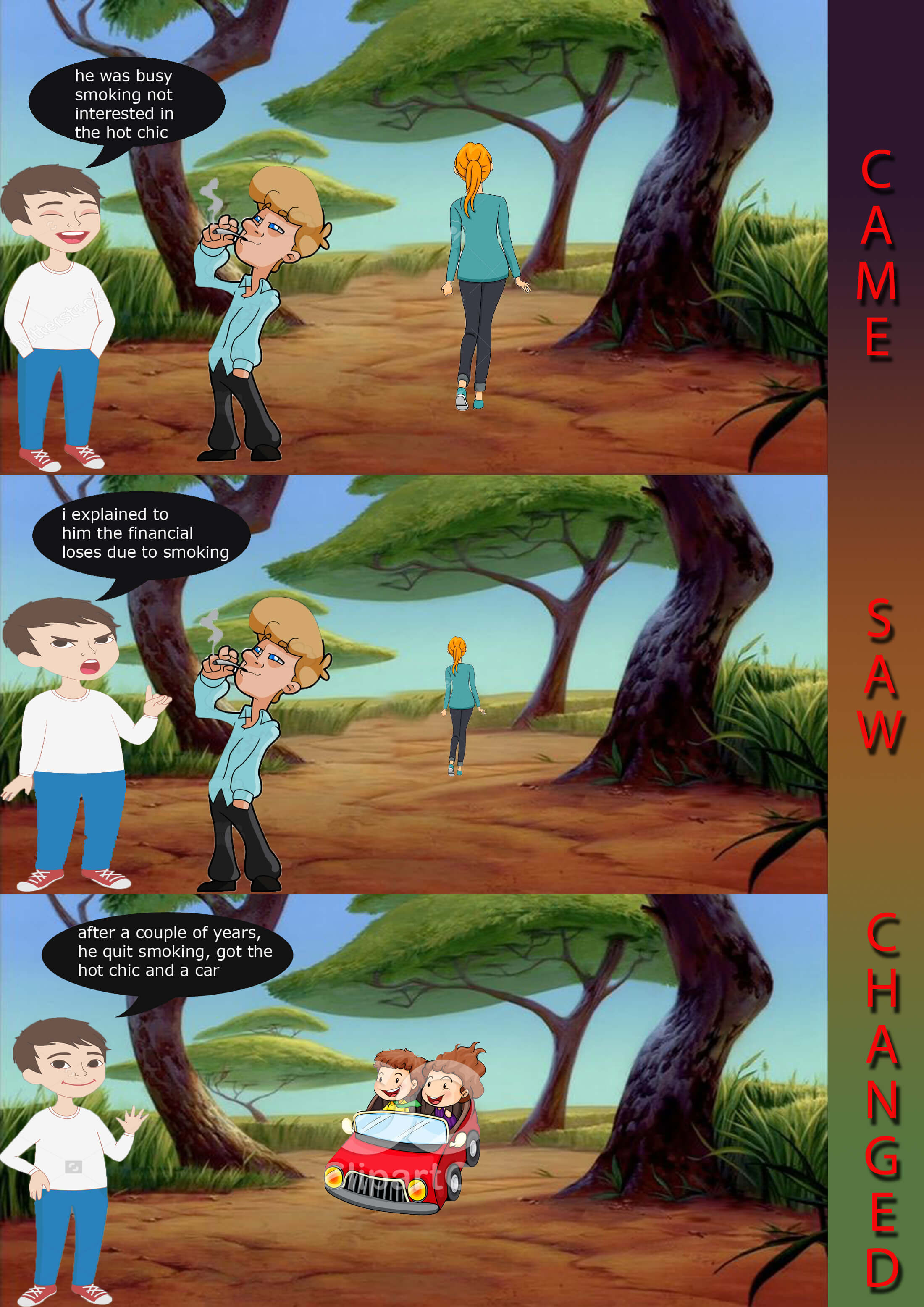 This is a small story which was scripted during a lecture, sitting on the last bench, next to a friend, in the class, that took place somewhere during

This is a small story which was scripted during a lecture, sitting on the last bench, next to a friend, in the class, that took place somewhere during the 1st week of December. Veni, Vidi, Mutati: I came, I saw, I changed

Well, after a lot of struggle and tough times I ended up getting admission into SIIB. As classes proceeded I got to know people. People from all walks, different culture, different behaviors, different habits and so on. Most of my friends smoke, and it makes me proud because I am in the ditch in which they are into. During their youth they got this habit as a style statement and they crib and want to leave but have no motivation or reason to leave. Whereas me on the other side calculate the money I am saving by not having this super habit of converting money into smoke.

So well here is the mathematical magic I showed my friend. And the discussion heavy discussion started on the last bench of a random lecture. Now, he started smoking 5 years back, an average of 10 sticks converted into smoke daily. Average cost was Rs. 10 to be considered. So, over 5 years he smoked up 365x5x10x10 which came up to smoking Rs. 1.8 Lakhs. And there was the magic, his eyes opened, he looked at the calculator, towards the professor who was teaching something unknown and back towards the calculator. That was only about the smoked up sticks. We did not calculate the price of chai which would be a favorite combo with the burning stick. I was feeling so proud and happy. Then we moved on to calculating the amount of money he gulped down in liquor. He dint want to reveal the consumption as he was sure that value would be larger and would shaken him further.

And there came the motivation. With the same money, he would have owned a lovely bike or a lovely mobile or have a lovely girlfriend or own an amazing laptop and been a gamer and so on. And there the change, I met him down the line after 2 years driving along with a gorgeous chic. He waved at me and said, I quit smoking & drinking too and with the same money bought a car and impressed this chic who is soon to be my wife.

A Comparative Analysis of Cryptocurrency and Equity 1

China supporting the US! 4