Beyond classroom, preparing the students for the corporate world in an exciting way is an amazing initiative by SIIB, to provide the new batch an amaz 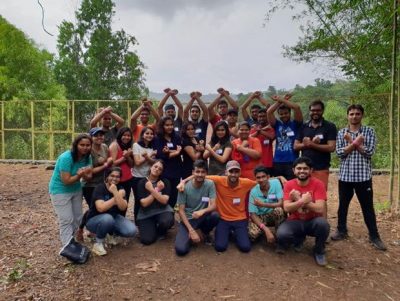 Beyond classroom, preparing the students for the corporate world in an exciting way is an amazing initiative by SIIB, to provide the new batch an amazing start to their journey of the upcoming rigorous two years. The whole batch was very excited to kick start their journey through this very interesting way of bonding and interacting.

So the journey started at around 5:30 in the morning .Everyone was pumped up along with some sleepy heads for the journey. Finally, the buses started and we reached “Surya Shibir” by around 10 am. Everyone was allotted their rooms and refreshed themselves after which we had an amazing breakfast.

Now, after all this, it was time for some real fun. All the students were divided into different groups for further activities. Initially most of the students were disappointed as all the friends were separated into groups. But, hey, we were there to make new friends and enjoy. Finally, the most awaited trek was started by a quick, simple and short interaction with some members of the outbound programme. The trek was super fun, but super tiring as well. But the time spend was memorable. After that we were given some time to prep for a chill out session, which was conducted later in the evening and which bought out the super talents of my fellow batch mates. From Dancing on songs like baby doll, mimicking the professors, to some soothing songs and guitar play. The evening was all about fun.

Second day, various, management games and adventure activities were organized by the outbound team. Tight rope walking, zip lining. There were a couple of fun races. There were games that were designed to make the team work together and form strategic plans.

Unfortunately, while the games were on, it started to rain and the outdoor games had to be cut a little short. But we did play for as long as possible and got drenched in the process. Finally the session ended up with a lunch. After lunch we had an activity in which we were supposed to make a banner for SIIB. Team ‘Creatives’ won the task and then we were served tea and snacks. The amazing experience came to an end when we all departed from there, Happy tiring faces made me realize that our upcoming two year journey is going to be the same .Some wins, some losses, some happiness and a lot of tiredness.

life@SIIB…the girl in the dark 0